our trip down the yellow brick road...

We had a great time the costume party last night! I must give a thumbs up to those who planned it! I was so impressed with people's creativity when it came to their costumes. There were some really funny ones and a few people did little skits while in character. Pretty funny!:)
As far as our costumes, all went pretty well. I didn't hit any obstacles in making anything and I think we pulled it off. Bekah has NEVER seen the Wizard of OZ and so I showed her pictures of Dorothy online. She could have cared less about the dress as long as she got to wear the ruby slippers:). Anytime people would ask her who she was she would run up to me and ask me "What am I called, again?" :) She had no problem however remembering her dog's name. She said it over and over..... I would not be surprised if she starts calling Abby "Toto". Little miss Anna was an Adorable Lion and I must say was so good all night. She was full of smiles and even showed off by taking a couple of steps at the party.(10 months and walking....... not sure how I feel about that one.) Josh and I are not usually ones to get into dressing up in costume but we will admit we enjoyed it, this time. Josh's face looked a little more "Blue Man Group" than "tin man" but I think he got the idea across and I actually enjoyed being a scarecrow for a night. So anyways.... here are the pictures of us all in our "OZ" attire... 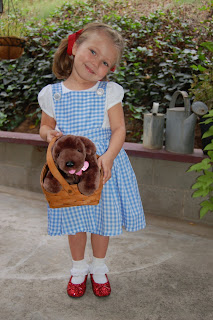 Little miss Dorothy and her dog Toto ;) (Pretty darn cute.... If I do say so myself) 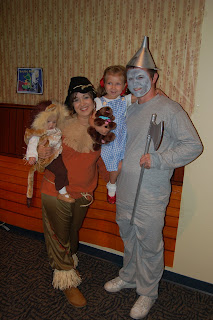 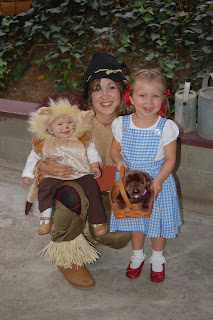 Me and my girls. (The tin man is taking the picture) 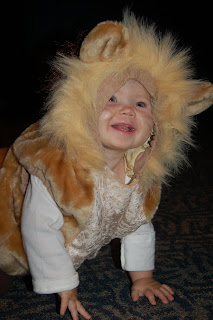 Roar!... My little doll in her lion wear....(She wiped the nose and wiskers off her face) 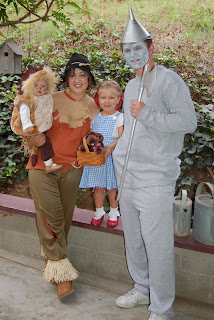