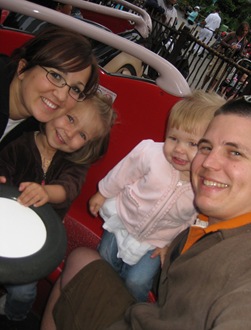 Our Disney passes are not valid for the month of July and so of course we are trying to get in as much time as possible. Yesterday, we had a great time! Daylight savings makes for, what seems to be, extended Disney fun!

We opted to spend the afternoon in California Adventure, as we were hoping to maybe be part of a "soft opening" for the NEW Toy Story ride. We didn't get to ride, but we still had fun watching two parades( video below)and going on all the bug's land rides.

Anna was into the music, Bekah was still riding out the disappointment of being too short for "Soaring Over California". (by ONE inch!)

And we had fun doing ONE more thing..... 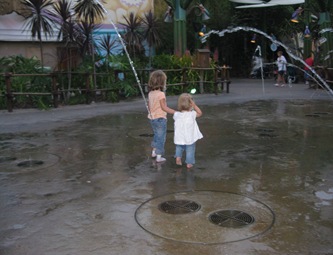 They have several areas in CA Adventure that are basically sprinklers- glorified. I will confess that I am a parent who has NEVER let my children romp freely through the water. I will 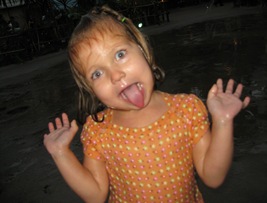 admit that I often think, when seeing children splash around in their clothes or even underwear..... "how do parents let their kids do that?" It just seems like extra clean up, extra work and the possibility of a child whining that they are cold or wet afterwards has been deterrent enough for me.

So when Rebekah asked if she could go in the water, my initial reaction was....... HECK NO! (pardon my frankness) However, after she asked, I paused and thought...... we are in no hurry, we have pj's for them in our bag, all the lines for the rides are long anyways, it wasn't like it was cold outside and when else have I said YES to this. This is when I said...... "sure..... go ahead!" Her  response was sheer GLEE! She headed in with no reservations.

Anna was willing to follow, but once she realized that you can ACTUALLY GET WET, she opted to sit with Daddy and I.

When I think about parenting, I tend to find myself saying "NO" more than I would like and so when given the opportunity to say "yes", it feels somewhat refreshing. I think Rebekah felt "refreshed" too. :)