BASEBALL= Bekah on the BIG SCREEN!

Tonight we went to the DODGERS vs. PADRES game. My Dad is a devoted Padres fan and I will admit that my loyalty and love for him is so BIG it even includes being a fan of his favorite team! So tonight was somewhat conflicting for me. The Padres didn't have a great season..... OK! They had a TERRIBLE season. The game tonight was at Dodgers Stadium and I will just openly say I am somewhat afraid of cheering for the opposing team when surrounded by very eager and pumped up LA fans. And I don't have anything against the Dodgers. Furthermore, while I enjoy baseball to a certain degree, I attend games more for the people watching and treat eating rather than actually watching the game. So I can say that in my heart I am a Padres fan but when you can't beat 'um........ join 'um, which means tonight we were SOUTHERN CALIFORNIA BASEBALL FANS. So yay for the Dodgers and hopefully the Padres will have a better season next year. :) 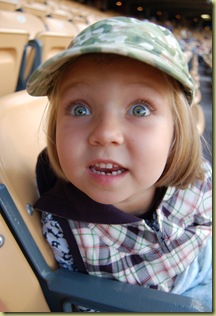 Another fun thing: Rebekah made a grand appearance on the jumbo-tron! It was so cool. She had to call grandpa and tell him she was on TV!

She was thrilled to get high fives from all the other people sitting around us and seeing as she is not one to shy away from the spot light she was eating up every minute of her 10 seconds of fame! 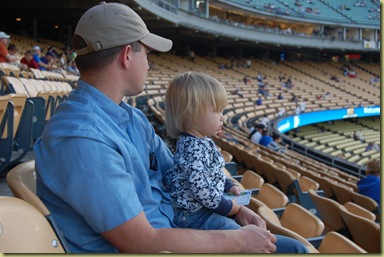 Anna was quite the wiggle worm and I am thinking that the cotton candy she ate only made the wiggle syndrome worse. :) She had a good time. But by the 6th inning mommy had had enough of the squirming and we headed home.

It was a fun night with lots of treats! :) 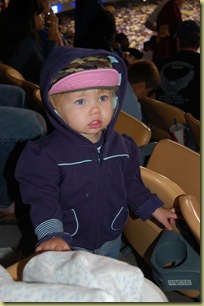 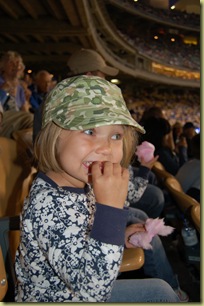